Something new has come to the safe industry which is especially important in relation to gun safes.  Underwriters Laboratories has come out with a new security rating.

Many years ago U.L. created a rating system, primarily for commercial insurance purposes.  Initially, ratings started out with TL-15, “TL” being short for “tool”.  To get TL-15 rating a manufacturer’s safe had to keep two of U.L.’s expert safe crackers from breaking in for at least fifteen minutes.  That 15 minutes means “time when a tool is in contact with the safe”, so actual elapsed time of the test is much longer, maybe several hours.  The testers have access to an extensive array of manual and power tools.

The ratings then go up in time to TL-30 and TL-60. “TRTL” ratings mean the testers also can use torches.   An “X6” designation means that the safe cannot be penetrated in any of the six sides.  So “TRTL30X6” means that U.L. could not break into the safe with torches and tools, through any part of the safe within 30 minutes.  TRTL30X6 vaults are large and extremely heavy.

Some years ago a Residential Security Container (RSC) rating was introduced.  The test is significantly less vigorous – it is a five minute test by only one person, who has access to a smaller array of tools.

Some RSC rated gun safes are actually quite easy for two people to forcibly open, while some are very difficult.  Because of the huge jump in security level from RSC to TL-15, U.L. has just introduced the RSCII rating to fill this gap.  The test for RSCII is a 10 minute test where two men can use all the tools available in the TL test.  Basically it is a “TL-10”, however that is not what they call it.

To my knowledge, the only manufacturer that makes RSCII rated gun safes is American Security (Amsec).  To make this higher rating they had to add more steel to their BF safe and put in a different boltworks.  The price of a new Amsec “BFII” is about half way between their standard BF and their least expensive TL-30 gun safe.

No doubt most Graffunder Safes and some Fort Knox vaults would also pass the new test.  A few “non-gun” fire/burglary safes would also probably pass.  The problem is that U.L. testing is very expensive, which will keep many companies from ever offering RSCII rated gun safes.

If you deal with a knowledgeable safe dealer you can learn enough to determine what level of security is right for you, and how to get the most security for your money.  In Michigan you would come to Hoogerhyde Safe.

If you share a large safe or gun safe with family members, especially children, you might need a separate little compartment inside it for sensitive items.  Maintain a little privacy and security – a place to hide your fun money, or the jewelry you bought your spouse for Christmas.  There are many options for this sort of thing, from a light duty security safe (Amsec’s EST916 on left) to a heavy duty Fort Knox Handgun safe (right). 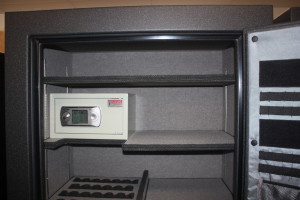 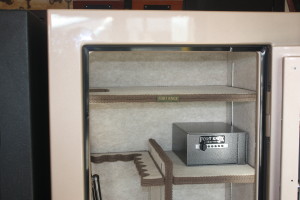 Putting a small high-security money chest in the bottom of your safe might be a good idea, especially if your big unit is light on burglary deterrence.  The added weight makes it more difficult for someone to move your safe.  Even if your big safe is forcibly opened it is extremely unlikely that the money chest could be compromised.  This arrangement was very common in businesses when everyone still dealt with cash rather than credit cards.  While the round door money chest pictured is only 10”H X 12.5”W X 20”D, it weighs a whopping 290# because the steel is over an inch thick.  Perfect for silver, gold or cash.  In retirement planning you hear about 401K’s and IRA’s; money chests are good for URA’s – Unreported Retirement Accounts. 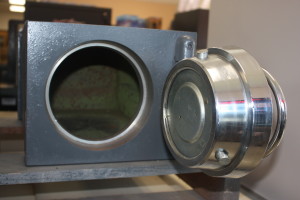 Alarming your gun safe is another option for increased security.  Some alarms just make noise to hopefully scare off a burglar.  Others can notify your cell phone or a monitoring company.  Door contact systems are the most common; the alarm is activated if the door is opened.

Having “a safe within a safe” makes sense for many people, and in West Michigan Hoogerhyde Safe is where you come for expert help.

Last year in mid-December I sold a nice Fort Knox gun safe to a man who wanted it delivered after the holidays.  He and his family were spending the holidays in Florida.  He called after Christmas to tell me that, unfortunately, his kids had gotten together and bought him a “Brand L” gun safe.

He really appreciated the thought and the expense they had put into his gift, but he was also disappointed because he knew the Fort Knox provided better security and better fire protection.  Understandably, he could not bring himself to return his kids’ Christmas present. Our customer was embarrassed about backing out of the unit he had purchased from us.  He was also uncomfortable about using a safe that did not meet his needs.

Read my post from Nov. 25, 2016, which talks about the down-sides of surprising someone with the gift of a gun safe.  Forget the surprise – talk with the recipient in advance to find out what they really need in a safe.  A good gun safe is a lot more money than most Christmas gifts.  But buying a cheap unit might be a mistake.

A nearby small town newspaper recently ran a story about a local restaurant robbery.  The story related how the safe with an electronic lock had been opened, without damage, perhaps by a method shown in an internet video.  The author and the local policeman came to the conclusion that no electronic safe locks can be trusted, so they warned people to only use dial type locks.  They are flat wrong.

The real story is that when it comes to safes and other security devices, you get what you pay for.  The “safe” in question weighs 14 pounds and can be purchased online for $125.  How much security do you think you can get for $125?  It certainly was not appropriate for use as a restaurant safe because the paper-thin steel would never keep out a burglar.  Further, when employees see a piece of light weight junk being used to store cash, they can come up with a plan to empty it.  Certainly this was an inside job, and the restaurant owners are to blame for stupidly tempting an employee into committing a crime.

It is true that many of these cheap electronic locks can be defeated easily.  Internet videos show how to open some of them too.  (Certain low-end gun safes also use similar inadequate locks.)  If this restaurant had invested in a real safe with a high quality electronic lock the safe would not have been opened without damage.  There are many U.L. Certified electronic locks that will not leave you vulnerable to theft.

Don’t be cheap and stupid:  When buying a safe for a business use some common sense about what you need to spend for security.

Earlier posts talked of the problem with gun safes having only one seal.  We have two safes in our shop from different manufacturers that went through fires, and they demonstrate the point perfectly. 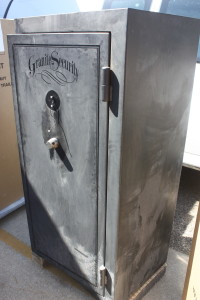 Gun safe manufacturers all talk about having the intumescent seal which is supposed to protect your valuables in a fire.  The theory is that when you have a fire, heat will cause the intumescent seal to swell up and seal the door shut.  But in many fires the gun safe does not get hot enough for the seal to work, allowing heat and smoke to enter between the door and frame.  Pictured is a gun safe with a “60 minute fire rating” which uses only the intumescent seal.  While the safe got coated with sooty smoke it did not get very hot, so the seals did not expand.  The paint will clean up fine; everything inside, however, was damaged by heat, acidic smoke, cinders and ash.  You can see that the seals never expanded.  Pictures of the interior show damage from smoke, ash & cinders.  Ironic:   The “Fire Safe” label is coated with soot and smoke that the “fire safe” did not protect against. 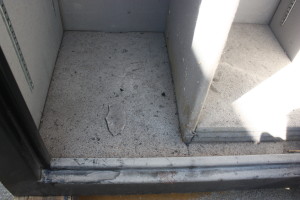 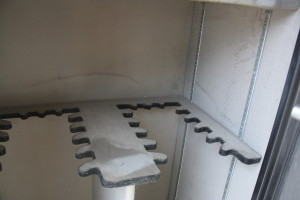 The plain fact is that for good fire protection gun safes need at least two different seals.  One needs to seal the door ALL THE TIME, whenever the door is closed.  See posts dated 7-6-15 and 7-20-15 for details.  Fort Knox gun safes use an airtight fin-type seal on most of their units and Amsec uses a foam cushion.  In both cases the gap between the door and frame is closed even when the safe is cold.

Seal systems on gun safes and vault doors are not a minor point – they are one of the most critical features.  Yes, you might need to pay a little more for real protection, but there is no point in paying less for a product which does not work!

It has been a long time since I wrote about the inferior insulation used on most gun safes, and the inferior way it is installed.  The photo below prompted me to comment on the subject again.  The picture shows a gun safe (made by the best-known manufacturer) which went through a fire earlier this year.  As you can see this gun safe failed completely.  The “Type X” drywall is in pieces in the safe, along with the remainders of expensive shotguns. 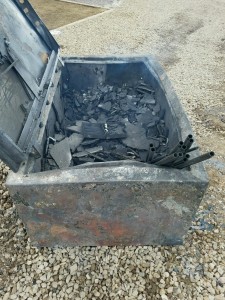 Brief refresher:  Type X drywall shrinks and breaks into pieces when heat from a fire cooks out the moisture.  Glue used to install the drywall gets soft and lets go, so the drywall caves in.  That glue probably burns, too.

Do not buy a gun safe that uses Type X drywall installed with glue!  There aren’t many good choices because almost every gun safe manufacturer uses this type of construction.  Try Fort Knox, Graffunder and American Security’s BF line.