A nice old gentleman who lives near our shop worked on trains his whole life.  He planned to give his railroad key collection to his grandson, but he brought them to me because his grandson had no interest in them.  I paid what seemed a reasonable price.  He came back several times to give me more keys as they turned up 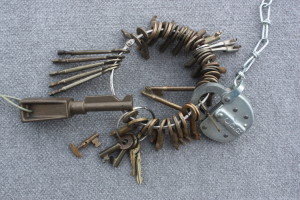 We have never provided locksmith services for railroads so I don’t know much about train locks and keys, but they represent lots of history.  Most are stamped with initials of the railroad company who used them.  Those companies are almost all gone.  While most of the keys were for padlocks, several keys are unusual, like the one that he said opened the last generation of cabooses.  One is a cute little hinged key which he said was for the time clock in a caboose.  My favorite is the last one he passed on to me.  It is huge — 6″ long, weighing over a pound.  I couldn’t guess what it was for so finally he told me it is the key to start up a locomotive.  How cool!

Thinking about the history behind train keys and locks and all that other stuff takes you back to another era.  It is easy to understand why there are so many avid collectors of railroad memorabilia.